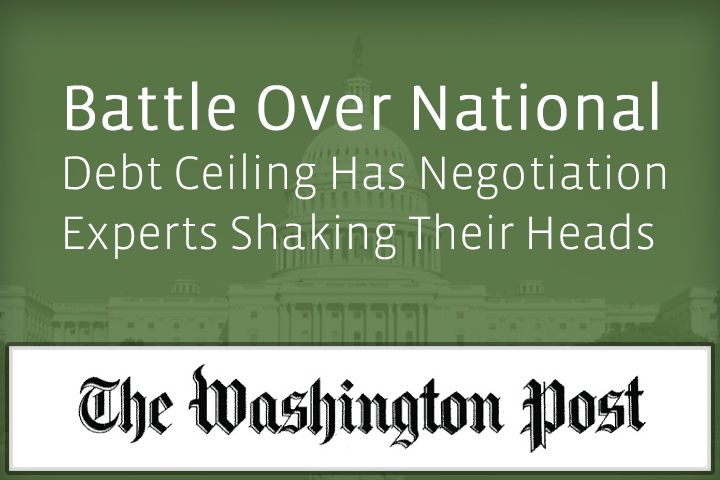 That’s the frustrated conclusion that America’s professional negotiators have reached, after watching Washington’s politicians begin their own negotiation over the national debt ceiling.

These professionals are ex-FBI agents, labor mediators, divorce counselors. They have learned the rules that help resolve unsolvable standoffs: Don’t lie to a man on a high ledge. Don’t box yourself in with sweeping threats. Don’t tell your adversary to “act like an adult.”

Now, they have watched the two parties bend or break those three rules. They worry that the politicians’ mistakes might only prolong their dispute — at a moment where every day of delay adds to Wall Street’s worries.

And it bugs them to see their art practiced this way. It’s one thing, negotiators say, to threaten the country with financial calamity if your demands aren’t met.

It’s another thing to do it incorrectly.

“There are ways to do this. There are tried and proven ways to deal with difficult negotiations,” said William Ury, who helped found Harvard’s Project on Negotiation and co-wrote the negotiation-lit classic “Getting to Yes.” “They work daily, in difficult hostage negotiations. Why not apply them?”

This negotiation is about raising America’s credit-card limit. If the debt ceiling isn’t raised beyond the current cap of $14.3 trillion, administration officials say the nation could begin defaulting on its debts in early August.

But the Republicans who control the House have said they won’t automatically vote to raise it. On Monday night in New York, House Speaker John A. Boehner (R-Ohio) laid out his party’s demands.

“Without significant spending cuts and changes in the way we spend the American people’s money, there will be no increase in the debt limit,” Boehner said, in an address to the Economic Club of New York.

A Washington negotiation is different than most, of course: It is also political theater, a performance for an audience of partisans and voters. But it still involves two sides that have to agree, despite their opinions, their grudges and their own stubborn egos.

“It’s time to grow up and get serious!” Boehner said about President Obama last month in a TV interview.

At their offices in Rockville, this is the kind of talk that divorce mediators John Spiegel and Donna Duquette do not allow.

“If I heard that, I would cut it off right there,” said Spiegel, who has counseled hundreds of couples in the middle of bitter separations.

“We want to make sure that you’re heard, and so the way you’re expressing it is going to help you,” Duquette said, recalling what she’d tell a spouse in that situation. “If you’re name-calling, if you’re questioning the other person’s motive, they’re not going to hear your good ideas.”

On the Republican side of the table, Ury — the “Getting to Yes” author — said Boehner chose a strategy that might leave him trapped in a political corner. The problem, he said, was that Boehner had issued a threat to do something unusually drastic: possibly allowing the country to default.

Ury tried to think of a parallel. “We’re in the same rowboat, and one person says, ‘If you don’t give me that last loaf of bread, I’m going to shoot a hole in the boat, and we’ll both sink.’ ”

Such a drastic threat, he said, could put Boehner in a box. If he carries through on his threat, Republicans could suffer politically. But, if he takes this hard line and then compromises, he could take heat from his own party.

For that reason, Ury said, Boehner might feel comfortable only relenting just before a deadline. That might be too late to avoid spooking Wall Street.

“The odds are that it will be close to the last minute,” he said. “Because each side will want to show their constituents that they did their best.”

On Tuesday, a spokesman for Boehner said the speaker knew what he was doing. “Boehner stated his position. That’s how negotiations start,” spokesman Michael Steel said in an e-mail.

But Chris Voss, a former hostage-negotiator for the FBI, said something Boehner did in the last negotiation could also threaten his hand in this one. That time, many conservatives supported the deal that Boehner struck to avoid a government shutdown — only to find that the spending cuts he won were smaller than expected.

Now, he said, the same conservatives are likely to be even more demanding. These are the metaphors that hostage-negotiators use: Voss thought of “jumpers,” the people whom he was called to talk down from bridges and rooftops.

In these cases, he said, it was usually necessary to say yes to some of their demands. Because, if they came down and found that the promise was false, another crisis would follow.

“If you get them down, and they don’t get some resolution to what they wanted in the first place, they’re going back up there,” Voss said. “They haven’t forgotten what was promised to get them down.”

On the Democratic side, Vice President Biden is leading a bipartisan team of legislators who are working on a solution to the crisis. But on Tuesday, press secretary Jay Carney told reporters that Boehner’s approach improperly tied spending cuts to the debt-ceiling vote: “To hold one hostage to the other remains extremely unwise.”

But even actual hostage-negotiators say the best way to settle a dispute like this is to avoid saying bad things about one’s opponents.

A statement like Carney’s “inflames the situation. You’re saying ‘He is a bad guy,’ ” said Gary Noesner, the FBI’s former chief hostage-negotiator. Carney also voiced more hopeful sentiments, saying that Obama and Boehner agreed that deficits should be reduced, and that the White House was optimistic that a deal would be done.

Noesner also said he worried the problem wouldn’t be resolved until the last minute. He said that years of dealing with these standoffs have taught that often, even confident-sounding people are unsure how to get themselves out of their fix.

“My experience is, more often, they have no idea what they’re doing,” said Noesner, who just wrote a book about his career at the FBI titled “Stalling for Time.” “It’s much easier to get into [a standoff like this] than to get out of it.”