Layman’s Guide to Iran Talks: Don’t Believe What You Hear 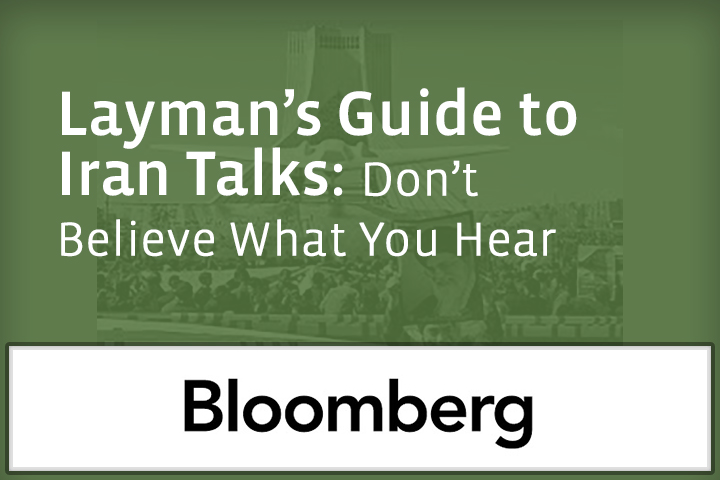 It’s a fool’s game to parse all the public statements and media reports about the nuclear negotiations with Iran in an effort to lay odds on the outcome as the Nov. 24 deadline approaches.

Deal-making, as any diplomat or skilled negotiator can tell you, takes place in secret, where the parties test the flexibility of their adversaries, and confidence-building and horse-trading are the name of the game. Good negotiators seek the best deal possible, and successful ones know when to quit bluffing or blustering and strike a deal.

“There’s no way for the public to assess what’s being said inside negotiations from public statements,” Carrie Menkel-Meadow, a professor of law and political science at the University of California at Irvine and author of 10 books on negotiation, said in an interview. “Virtually every breakthrough in diplomatic negotiations happens in private.”

“If there’s a deal with Iran, it won’t happen in one fell swoop, but in incremental offers and concessions and side-bargaining,” she said. “If that were done in public, it wouldn’t happen.”

In part because the U.S. and Iranian governments have competing interests, but also because they have demonized one another for 35 years, their negotiators can’t talk about any potential compromise publicly without looking “like they’ve made a deal with the devil,” she said.

The pace of negotiations picks up next week, with U.S. Secretary of State John Kerry meeting with Iranian Foreign Minister Mohammad Javad Zarif and Catherine Ashton, the European Union’s former foreign policy chief, in Muscat, Oman, on Nov. 9 and 10. The following day, Zarif will meet with the chief negotiators from the six nations seeking a nuclear deal with Iran — the U.S., U.K., France, Germany, China, and Russia.

Aaron David Miller, who worked on Israel-Palestinian negotiations for several U.S. administrations, said he’s “given up trying to read tea leaves” on the Iran talks. As challenging as an accord may look, he added, it’s still “much more likely than a Middle East peace deal, because you have strong actors who are willing and able to take decisions, and there’s a certain degree of urgency.”

Last week, Kamal Kharrazi, the foreign policy adviser to Iran’s Supreme Leader Ayatollah Ali Khamenei, said that adding more economic sanctions won’t force Iran to bend, and that for the international community, the coming weeks “are the best opportunity for them to resolve their issues with Iran.”

The message to Iranians: We’re not going to capitulate. The message to the other side: This is your last best chance to get a deal.

Meanwhile, European officials have said publicly what some Americans say privately: Unless Iran reduces its nuclear demands, more time will be needed to get an acceptable deal.

While that may be the likely outcome, talk of an extension is also a way for each side to signal to the other that “you can’t use the clock to put pressure on us” for last-minute concessions, said Trita Parsi, president of the National Iranian-American Council and author of “Single Roll of the Dice: Obama’s Diplomacy with Iran.”

Another key to decoding public statements before the Nov. 24 deadline requires recognizing that some of the messages are intended for interested bystanders who won’t be in the room when the negotiations resume in Vienna on Nov. 18.

William Ury, co-founder of Harvard Law School’s Program on Negotiation and co-author of “Getting to Yes,” advises thinking of the talks as having three negotiating tables: one with the six world powers and Iran, a second with Iranian officials and their hard-liners at home, and a third with the Obama administration and skeptics of a deal in Washington, including Congress and advocacy groups that see a deal with Iran as a threat to Israel.

“It used to be that those were three separate negotiations,” Ury said. “But now thanks to social media, things being said at any of those three tables are instantly available to all three. It feels like you’re negotiating in a fishbowl.” That makes it hard for both the U.S. and Iran to reassure their own constituencies at home without saying things that cause problems for the other side.

Parsi said he sees signs that the U.S. may be “preparing the domestic audience that a deal is a potential reality.”

“The art of diplomacy,” said Parsi, “is to make words mean different things in different contexts.”

Citing a speech last week by chief U.S. negotiator Wendy Sherman, Parsi said she was “defending and advocating a deal,” arguing that the world is a safer place because of limits on Iran’s atomic activities. That may indicate that “they’re closer than they ever have been before if they have the confidence to sell it,” he said.

In the final weeks before the one-year anniversary of an interim accord that traded limited nuclear concessions for limited sanctions relief, public statements by officials are sometimes aimed at the other side, and other times at the hard-liners in one’s own capital who oppose any compromise.

“Experienced observers can read between the lines,” said Robert Einhorn, a former State Department nonproliferation adviser who was part of the U.S. negotiating team until last year. In some cases, Iran’s “tone may sound uncompromising, intended to satisfy a domestic audience. But to the expert it’s leaving some wiggle room,” akin to one side pinging the other with sonar.

President Barack Obama has said the U.S. wants a deal, but won’t settle for a bad one. Iranian Supreme Leader Khamenei has said he supports President Hassan Rouhani’s negotiators seeking a nuclear accord, but he also has warned that the U.S. can’t be trusted.

Haleh Esfandiari, director of the Middle East program at the Wilson Center, a policy institute in Washington, said that in the Iranian political context, negotiators can interpret what Khamenei says “very narrowly or quite widely.”

Good negotiators also are adept at paving the way to claim credit for success while simultaneously setting the other side up to take the fall for failure.

Public messaging from Iranian negotiators in the last year has been calculatedly optimistic, Parsi said, as Iran has sought to portray itself as the reasonable party, ready for a deal if only the other side would cooperate.

Former negotiator Einhorn said the Obama administration could “effectively refute the narrative that Iran is the more flexible party” but is reluctant to “negotiate in public or create expectations.”

In the Iran talks, “both sides need to pay careful attention to narrative control, not just arms control,” Ury said. “Cooperation needs to be not just on reaching a deal over centrifuges, but dealing with very real concerns of conservative elements on both sides, and helping each other manage those elements” by refraining from crowing victory or laying blame.

John Limbert, a former U.S. diplomat who was held hostage in the U.S. Embassy in Tehran and decades later advised the Obama administration on Iran, cautioned that while it’s tempting to use tough words about one’s position to placate domestic critics, those statements hurt closed-door talks.

Limbert warned against “silly and borderline racist stereotyping” of “Iranians as master negotiators” who are going to wear down the U.S. with endless demands and outwit the international coalition.

“People talk about Iran as patient chess players who think many moves in advance. They’re not,” said Limbert, a fluent Persian speaker and author of “Negotiating with Iran: Wrestling the Ghosts of History.”

“Iranians like backgammon much more, which you can’t plan very much in advance. A good throw or bad throw can completely turn the game around, which puts a premium on fast reaction to changing circumstances and a certain degree of improvisation.”

That, of course, only makes reading the tea leaves even more difficult.

To contact the reporter on this story: Indira A.R. Lakshmanan in Washington at ilakshmanan@bloomberg.net

To contact the editors responsible for this story: John Walcott at jwalcott9@bloomberg.net

No Replies to "Layman’s Guide to Iran Talks: Don’t Believe What You Hear"