Dealing with Difficult People: Lessons from Iran and Cuba 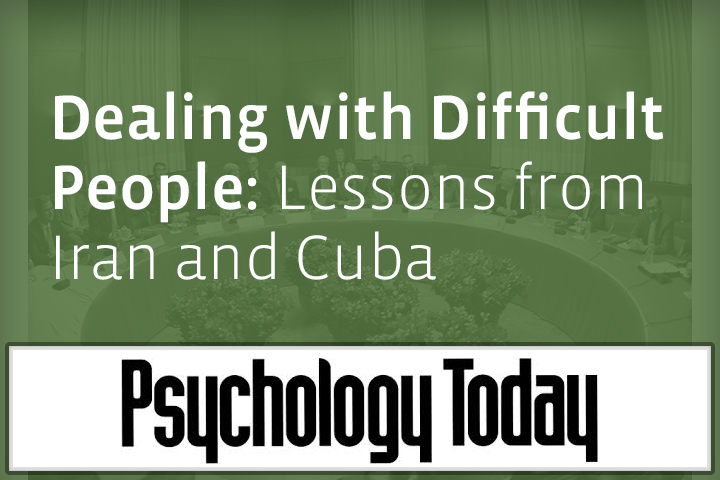 3 Lessons We Can Learn From High Level Negotiations

What can the meeting between Barack Obama and Raul Castro and the framework agreement between the United States and Iran, teach us about negotiations? Which are the lessons learned that we can apply to our own life when we have to deal with difficult people?

This past weekend, history was made. When Barack Obama and Raul Castro met in person, it was the first time that the two nation’s top leaders met for substantive talks in more than 50 years. Obama and Castro interrupted a decades-long standstill and launched a new era of U.S.-Cuba ties.

Two weeks ago, the United States and Iran reached a milestone, signing a framework deal on nuclear restrictions. Though much needs still to be ironed out, the agreement represents an important achievement considered that the two countries have not been in speaking terms for 35 years.

From these two important and historic events, what can we learn for our own everyday negotiations with difficult people?

About two years ago, when president Obama accused Iran of secretly enriching uranium in the Fordo bunker, he demanded the closing of the facility. Iran not only did not comply, but it radicalized its position. Now, as a result of negotiations, Iran has agreed to stop enriching uranium and to convert the facility at Fordo.

On a different scale, you might find yourself in a similar predicament. For example, how many times did you tell your teenager that he or she should come home at a given time and as a result all you got is that he or she got home even later than usual?

Playing tug of war can be every exhausting. It takes lots of strength and effort. This is what happens when you exchange arguments and trade conclusions. Dancing, instead, is much better. It might take time and practice until you learn the steps and you enter in sync with your partner, but it is much more enjoyable than a tag of war. In a negotiation, inviting the other to a dance means to have an open and honest conversation, as opposed to a monologue from the pulpit.

With your teenager, instead of giving a command, try to have a conversation about why going out late at night is important for him or her. You will create a space where your teenager eventually will be ready to listen to your concerns. A mutually satisfying compromise can emerge.

Lesson #2: Focus on interests, not positions.

This is the lesson that Roger Fisher and William Ury gave in their bestselling book Getting to Yes(link is external). For as long as the United States and Cuba and Iran focused on their positions, no substantial progress was made. To the contrary, decades have passed, deepening the distrust, the misunderstanding and the estrangement.

Instead, shifting from positions to interests allows negotiations to be productive and to long awaited solutions to emerge.

This shift is reflected in Obama’s statement after his meeting with Castro this past weekend. “Our governments will continue to have differences,” Obama said. “At the same time, we agreed that we can continue to take steps forward that advance our mutual interests.” The positions remain different, but there are interests that can be negotiated.

In fact, having opposite positions does not mean having also irreconcilable interests. The framework agreement reached by the United States and Iran meets the intertwined interests of the two countries. On one hand the United States achieved the goal of considerably slowing down Iran’s acquisition of a nuclear bomb, and, on the other hand, Iran obtained the lifting of economic sanctions.

Whenever you area dealing with a difficult person, shift from positions to interests. Make an effort to identify the interests that lie underneath the positions of the other. This will allow you to generate a menu of alternatives and solutions. At the same time, rather than stating over and over again your position, express to the other party your own interests.

Lesson #3: Build a Golden Bridge to Your Opponent.

This is a metaphor suggested by Sun Tzu, in The Art of War. “Build your opponent a golden bridge to retreat across,” he wrote.

As William Ury(link is external) highlights in Getting Past No(link is external), if you push and insist you are making it more difficult to overcome the resistance of the other party to enter into an agreement. Instead of stubbornly pushing, you have to do the contrary, Ury suggests. You have to draw the other in the direction you want him to move. In order to do that, you need to start from where the other is and over time converting him in a partner in searching for a mutually satisfying solution.

By engaging Iran in negotiations, the United States created a dynamic that allowed for mutually beneficial solutions to be identified.

This is not an easy process, and as Raul Castro said to the media on Sunday, a great amount of patience is required.

Mutual trust, understanding, and effective communication are not established overnight. But in the long run, negotiations create a space where new dynamics are possible and solutions are created. Negotiations are a constructive way to solve problems. They require the courage of the parties involved to step into the unknown and to be surprised.

In your everyday life, whenever you are dealing with someone difficult, stay curious. Go past your own fears and negative perceptions, go beyond stating positions and instead try to identify the underlying interests of the other.

Stop the blaming game and instead express your own interests and how a situation is affecting you. Most importantly, listen to the other. Lead with your ears, as someone once said. When they finally listened to each other, the United States, Iran and Cuba made history.

Aldo Civico coaches individuals and groups on how to upgrade their negotiation skills, to become more effective communicators and to increase their emotional competency. In his workshops, seminars and classes, he teaches the skills he has honed in 25 years of experience working in conflict resolution around the world, from the Middle East to Latin America. For more information, you can visit his Facebook page(link is external).

No Replies to "Dealing with Difficult People: Lessons from Iran and Cuba"