“Yes! No. Yes?” How to turn someone down without ruining your relationship 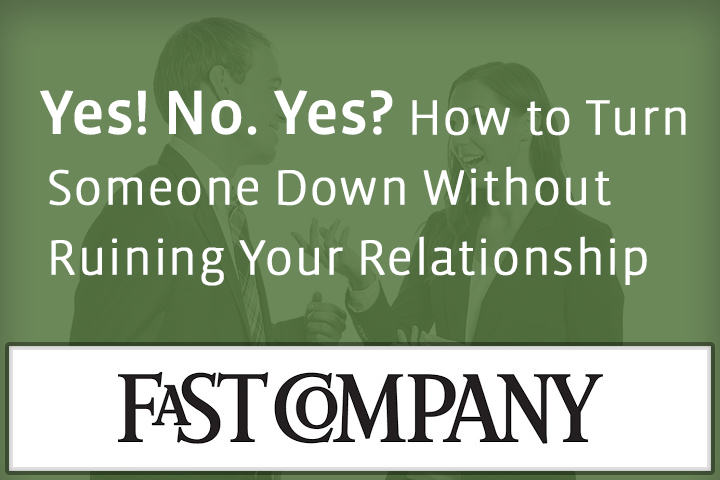 In business, and in life, sometimes you just have to say no. Here’s how to do it without ruining the relationship.

It’s one of the most powerful words in our language, and it can stop a conversation dead in its tracks. But, according to William Ury, Ph.D., co-founder of Harvard University’s Program on Negotiation and author of The Power of a Positive No: How to Say No and Still Get to Yes, it can also be a key word in strategy.

“In order to get to a yes that satisfies your needs and interests, it’s also necessary to be able to say no,” Ury says. In other words, sometimes you need to say no to get to the right yes.

Ury says his “Yes! No. Yes?” approach can be used effectively in both business and personal relationships. It works like this:

The First “Yes”: Let’s say a client wants to go with a lower-priced alternative, which you know will produce a substandard result. The first Yes! is the core value, need, or principle you’re trying to protect. For example, protecting the quality of the brand.

The No is a respectful no, saying, “To maintain our quality standards, we cannot go with the lower priced/lower quality item.”

The Yes? acknowledges the ongoing relationship, and sounds like, “Let’s work together to create something that works within your budget but doesn’t adversely affect the quality of the product.”

You can apply this approach to your personal life as well, Ury says. For example, your 16-year-old son has been staying out late. A forceful no will just cause them to act out, he notes. But the “Yes! No. Yes?” approach looks like this:

Regardless of your approach, Ury suggests including these three components in your conversation:
Set clear expectations at the outset.

Managing expectations is very important, Ury says. You don’t want the person you’re speaking with to get the wrong idea about what you’re saying. For example, if a colleague asks you to stay late to help them with a last-minute project, start with something like, “That might be difficult. Help me understand what you need.” That way, you give them the courtesy of hearing them out, and it allows you to frame your positive no in a way that’s least damaging to the relationship, Ury says. You’ve also signaled to them that what they’re asking may not be possible.
“Worse than saying no is having to say no twice because you didn’t say it clearly enough the first time.”

While it’s tempting to “pad your no” to make it more palatable for the other person, “there have been a number of times when I’ve leaned too far in this direction and the person missed my point,” says Dan Cumberland, a Seattle-based photographer. “What’s worse than having to say ‘no’ is having to say ‘no’ twice because you didn’t say it clearly enough the first time,” he says.
Ask questions to understand what’s being asked of you.

Asking questions is important, too, because it helps you to understand what the other person needs, Ury says. If a colleague’s asked you to help on a project and you’re swamped this week, ask whether you can help them next week, refer someone else who may be able to assist, or see about getting an extension on one of the projects from your manager. Offering a constructive proposal allows you to protect your core interest (getting your work done) while being respectful of the other person’s needs, Ury says.
Listen to really understand the person’s needs.

Listening is key in any negotiation, and is more important than speaking, Ury says. You need to find out the other person’s needs, because you’re trying to get them to accept your ‘no.’ “Listening shows respect,” Ury notes, and it helps you formulate your response based on their needs. “Saying ‘no’ is a gift to the other side,” Ury says. In business, and in life, we often give people mixed messages. By giving a clear, respectful ‘no’ up front, we allow them to move on, he says.

No Replies to ""Yes! No. Yes?" How to turn someone down without ruining your relationship"