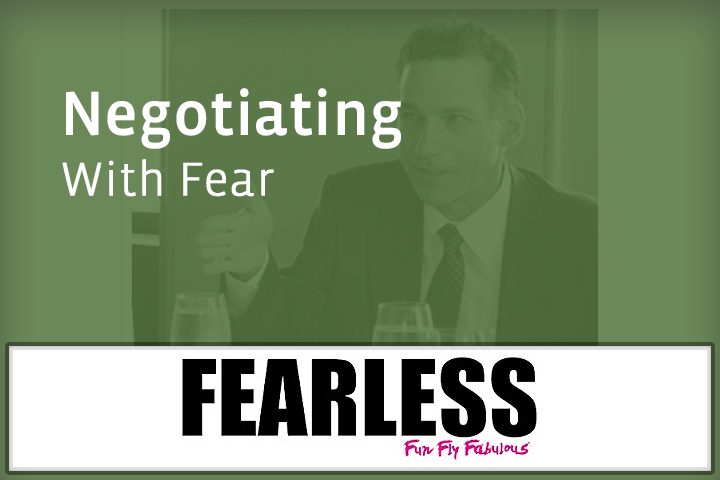 In my negotiation work, fear is a daily companion in my life. I remember feeling trepidation when I first
met President Hugo Chávez in Venezuela for a meeting, wondering, “Is he going to take me seriously? Is this is going to last only ten minutes?” Before the meeting, I insisted on going back to my hotel to spend an hour by myself in the garden. I sat quietly and thought, “Okay, what is this opportunity I’ve been given to meet the President of Venezuela really about?” I needed solitude to think before we met – that kind of quiet is essential for me in dealing with fear. I like to seek nature and allow myself to listen to an inner voice that you don’t normally hear in the business of life.

My initial inclination was to go in and talk to him about how I felt, because I had a lot
I wanted to say about things that I learned, but at that particular moment, my intuition said, “Don’t just go in and offer him advice.” I only got ten minutes, and I feared that with time so scarce I wouldn’t be able to say what I wanted to. What came to me was to simply let go and allow him to speak, draw him out, listen and not worry about the time we had left. I didn’t want to worry about if I would have the chance to say what I thought because it distracted me from actually listening to him.

That way, I was in a much more relaxed state when we began because I didn’t need to get something done. I let go of all my expectations and had a clear intention without an attachment to any particular outcome. We ended up talking for over two hours – we got into a long conversation because I listened to him, and he told me the story of his life. Only after a full hour of conversation did he ask me how I thought he ought to handle the conflict with his opposition, and only then was I able to advance some ideas. He liked those ideas because he said, “Can you come back tomorrow?’”

Go to the Balcony

Fear generates a circular holding on to your apprehensions. The more you hold on, the more fearful you get. The more fearful you get, the more you hold on. To break free of that you need to begin to let go. Personally, it’s much easier to let go if I “go to the balcony,” which is my term for steadying myself and breathing deeply in order to gain a larger perspective around the fear. To realize that there’s a larger world, a larger presence, it allows you to see what you’re going through at that particular moment, and shows you that no matter what you’re going through, it’s a small thing in the grand scheme of things.

When I was in college I did a lot of rock climbing and mountain climbing, always testing my own fear. It was really helpful training because when you’re alone on a mountain or on a rope, you’re dealing with very real fear all the time, and you have to learn to stay balanced, centered, and to let go of the fear. It was a valuable asset later in my negotiation training.

Fear can be an ally, a fine voice for you to listen to, and can sometimes play an evolutionary role. The problem occurs when you allow it to control you. Fear has a particular wisdom to share if you let it feed into the mix naturally. But if you allow it to be the driver of the car, it’s not a very intelligent driver. It needs to be properly appreciated in its own place, heeded, and then let go. Developing your intuition can be a very helpful means of releasing your fear because intuition and fear are in dialogue with each other. I’ve found that if I listen to my gut, my fear tends to diminish because I’m connecting with something that transcends my feeling of fear.

Perspective is also important. Everybody has a different way of getting it; my favorite method is nature – being in the woods or near mountains. For someone else it might be taking a shower, going for a run, talking to a close friend or deep breathing. You need something that breaks the cycle of fear and allows you to come back with a fresh viewpoint. If I can be in a garden or take a walk, my fear dissipates as I calm down, start breathing, and start appreciating the world around me. I’ve had a strong affinity for the mountains ever since I was a little boy, and that presence helps me remove myself, slow down, and observe my fear from the outside.

One of the hardest and most fearful times of my life was when my daughter was run over as a child and went through multiple surgeries. Prior to the accident, my mother had just passed away and shortly thereafter my brother died. It was so intense and there was so much going on – I was afraid for my daughter, for her life, and for what was happening to my family at the same time. There was so much fear in my life that I just could not understand how things around me were falling apart. Now, when I look back, although it was a terribly trying time, I realize it was also enormous gift because it played the role of waking me up and caused me to enter into a kind of inner reflection, an inner awakening. I had to work around the fear and work around the meaning in my life, and doing that has sprouted some wonderful flowers in my life. As hard as it was, that time actually enriched my life, and it’s given me resilience and strength and insight into what really makes me happy in life.

Listen to the Signal

The wisest advice I ever heard from someone is to always do what you’re afraid to do, and to realize that if you’re afraid to do something, it’s probably a signal you should go in that direction. That’s the opposite of how we normally construct fear. But there’s a certain kind of fear that’s a signal in cautionary moments that shows you a particular zone of discomfort that you’ll benefit from entering.
It might be something you need to learn.

I remember as a boy I used to do high jumping, and in high jumping, when you jump over the bar, what happens? As soon as you succeed, they raise the bar – it only ends when you’ve knocked the bar down. It’s such a metaphor for life – that failure is inevitable, it’s a part of life, and in fact from failure comes great learning. The founder of Johnson & Johnson said, “Failure is our most important product.” If you put it in that perspective, it calms your fear of failing. An example from negotiation is George Mitchell, once the special envoy to the Northern Ireland peace process under Bill Clinton. He spent almost two and a half years listening to people on all sides of the conflict in Belfast, and remarked that it took him 753 days of failure and one day of success to solve the conflict.

Over the years, I’ve gained more self-trust and faith. Even in high school, I didn’t just do what others expected of me, I always tried to listen to my intuition and reach a decision within myself that I could follow, and I’ve confirmed that that’s the right way of making decisions for myself. Each time I haven’t done that, and I’ve doubted or deviated from my inner guide, I’ve made mistakes and regretted it. I’ve learned serious lessons from those mistakes. When I’ve followed it, even when it didn’t seem like the right thing to do, it turned out to be the best path for me.

I never underestimate trusting the deeper parts of myself, and listening to that inner voice, however quiet it may be. I follow it even if everyone else has a different view or logic dictates I should do something else, and it’s always steered me right. Whether it’s steered me to success or failure is not
the point, but it has always guided me in the right direction, like following the flow of my personal destiny. That’s how I’ve learned to trust myself, which I didn’t understand at first. It’s something that comes from within, from the heart more than the head. The mind is a very powerful tool that shouldn’t be disregarded; it’s a good advisor, but not the best decider.

1 Reply to "Negotiating With Fear"