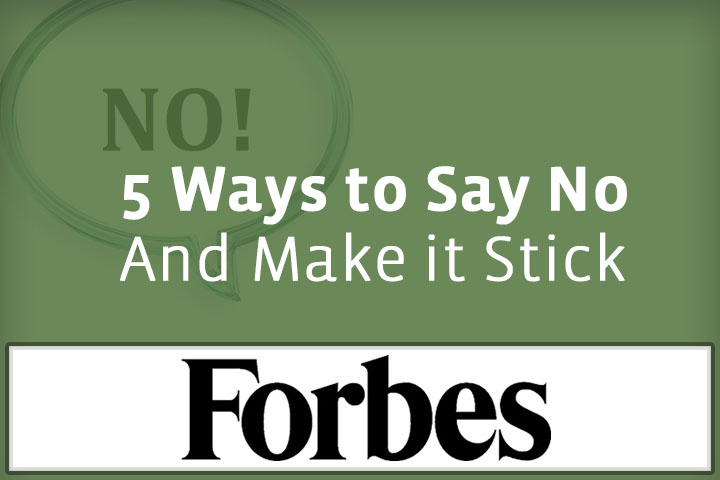 Unlike most two year olds, most of us have a hard time saying “no.” And one of the most difficult things to do in your work life is say “no” to bosses, colleagues or co-workers.

In the quest to seem more likeable or win people over, most of us tend to say “yes” to far too many tasks that have nothing to do with our original job descriptions. So why is it so hard to say “no” in general? “For a lot of people, ‘no’ is one of the hardest words to say. We’re afraid that if we say ‘no,’ we’re going to ruin a relationship,” says William Ury, co-founder of Harvard’s Program on Negotiation. Ury, whose new book is Getting to Yes with Yourself and Other Worthy Opponents, believes that fear and guilt are the two primary obstacles to saying “no” and that “the key to saying ‘no’ is you have to start the ‘no’ paradoxically with a ‘yes’ – which is a ‘yes’ to yourself.” In other words, you have to be the priority and the bottom line.

“In this day and age, there’s so much coming at us all the time. In order to say ‘yes’ to anything truly important, first imagine all the things you have to say ‘no’ to,” says Ury. Bottom line – saying “yes” to everything can become detrimental to your long-term career and goals and potentially leave you too overextended to understand when to say “yes” to the right things.

But before you start randomly saying “no” to everyone and everything, pay attention to the reason behind the response. And try to use these 5 tips to make your next “no” stick, instead of waffling and giving in.

These five tips will help you say “no” and be better off for it!

1. Use “No” To Make You More Desirable

Playing hard to get in the professional arena is not necessarily the best business tactic, but sometimes saying “no” to a client actually makes them realize just how fortunate they are to be working with you. “Sometimes saying ‘no’ to my clients highlights our high standards and integrity,” says Matthew Katzeff, Director, Valuation Services and head of the NYC office for GBQ Consulting. Katzeff continues, “Not giving in to client demands when they are ultimately not in their best interests proves to them that we are more discerning with a very high degree of integrity and sophistication, and hence more desirable due to the fact that our work will hold up to the highest level of third party scrutiny.”

Ury says the key to making “no” stick is to make it a positive “no.” You may be saying “no” to the project, but you also might be leaving the door open for a continued relationship. “There’s a ‘no’ that’s matter of fact, respectful, and that can lead to a ‘yes’ on the other side.”

In fact, though it sounds unrealistic, there are times when hearing the word “no” can actually make you and the person asking feel better about the situation. Alicia Rose, Boston-based partner at Deloitte & Touche LLP says “There are two great ways to respond to a request: ‘Yes, and,’ or ‘No, but.’  You can say ‘yes’ and be sure to ask for the support and resources you’ll need to be successful.  Or say ‘no,’ but find someone who can professionally benefit from assisting.  Either way, you’ll create a win-win experience.

Though there are no definitive statistics on the subject, most of the people I spoke with about learning to say “no” agreed that women seem to have an even harder time than men simply saying “no.” And maybe that’s the key – simply say “no.” Too many of us preface a “no” with “I’m sorry” when we really aren’t. “Putting the I’m sorry in there weakens it,” says Ury. “It opens up a door to press you and make you feel guilty. I think it’s better to say I can’t, or I’m not able to. Thank you for asking me. I’m not able to do it.” But you should still try to be nice about it.

4. Recognize That Saying “No” Is A Business Skill

Chuck Pappalardo, managing director of executive recruitment firm Trilogy Search says that, “To be successful today, it is essential for young professionals to marry their mastery of 21st-century skills with an old-world understanding of 20th-century attitudes. This means having the temperament, character and social skills to perform a job with integrity and without a sense of entitlement.” In some cases, saying “yes” to every single request doesn’t help younger employees improve their overall professional skills. Or, as Pappalardo says, “Opportunities are not owed, but earned. Those with a willingness to work hard, strong desire to succeed and ability to stand up for what’s right will be valued and rewarded in the workplace.”

If it still seems too difficult to simply say “no” and stick to it, consider practicing saying “no” to anything that drains you or no longer allows you to feel helpful or valued. Michael D. Ostrolenk, a Master Coach and Program Director at SEALFIT’s Unbeatable Mind Academy, says that two summers ago was his awakening to “no.” “I was diagnosed with adrenal fatigue as a result of working two full time jobs, too much training (SEALFIT and training to be a Krav Maga instructor) and not sleeping enough.” For Ostrolenk, saying “no” started a quest to regain his energy; in the process he realized he was overextended and stretching himself too thin. Ostrolenk resigned from 5 boards he served on. “Saying ‘no’ to them (the boards) and ‘yes’ to my time and energy felt great. Funnily enough, I was able to do more for some of them off their boards then on.” He also sets aside periods of time where he chooses not to start new projects or conversations. “This has been difficult, as I have a generally good habit of trying to help others. I try to be transparent about this process so I can temper disappointment in others.”

Saying “no” isn’t easy, but sometimes it might ultimately prove to be the better option and choice for both yourself and for someone hoping for a “yes.”

Rachel Weingarten is an internationally recognized lifestyle writer, content strategist and an award-winning author of three non-fiction books who writes most often about business and style. Tweet with her @rachelcw.