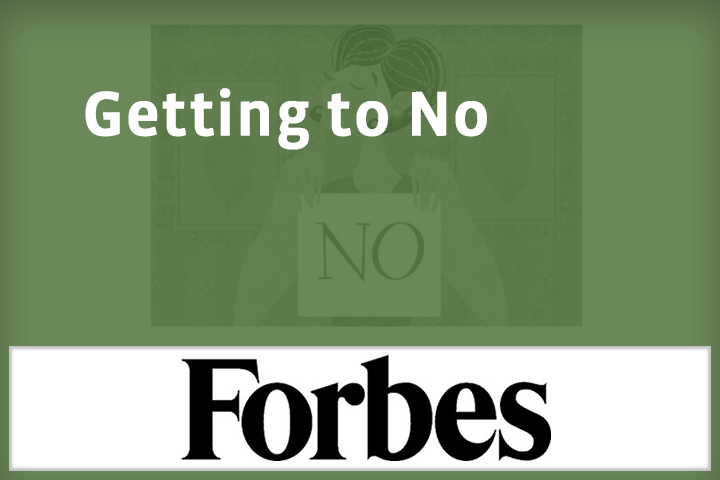 Ask Dian Griesel to bake cookies for her 6-year-old daughter’s school fund-raiser and she’ll find a way to do it.

“I am my mother’s daughter,” says Griesel, the 46-year-old founder and chief executive of the Investor Relations Group, a communications company with $8 million in annual revenue. “My mother never said no. She would never have served any store-bought cookie or cake in her life.”

But when it comes to traveling for business, new clients get a different answer. No. “Sometimes they can’t believe it,” Griesel says. “But because I’ve said it up front, it doesn’t become a problem.”

Saying no has become a crucial life skill for two-income families with increasing hours at work. But many people are afraid of that two-letter word, says William Ury, author of The Power of a Positive No. “We’re afraid of not being liked, not being accepted,” he says. “We’re afraid of hurting a relationship or losing a deal.”

For business owners or independent consultants, it can be particularly hard to turn down new projects or clients. When Cheryl A. Smith started Kansas City Home Care in 1989, she signed on every client who called, thinking that more customers always meant more profit. But some customers required too much hand-holding or made unreasonable demands. Rather than boost profits, they were costing the company money.

Now, Smith tells prospective clients that she won’t take every case. “I tell them from the moment I talk to them, if we don’t feel like we can do a good job on this case, we will refuse it,” says Smith. When she accepts a client who later drains her time and money, she ends the relationship, saying, “We just don’t think we can do a good enough job for you.”

The key to saying no: be polite but direct. Don’t worry about seeming “nice,” says Michael Watkins, founder of Genesis Advisers, who has taught negotiation courses to executives at Harvard. Many people offer unnecessary details or even flattery when saying no, hoping kind words will soften the rejection. That can backfire, Watkins says. Every nice thing you say about the project gives the requester a chance to push harder for you to say yes. And listing all 25 things on your to-do list will make you seem defensive, as if you really believe you should be saying yes.

Avoid the self-deprecation approach as well. Many people denigrate their own skills when saying no, protesting, “I’m really not the best person for this project.” But acting coy is usually an unsuccessful strategy, says Griesel. Whenever she claims she cant do something, the requester responds, “But you’re perfect for this job!”

Even saying yes to a tiny request could get you in trouble. A commitment that seems small can easily grow, says Watkins. “It’s a classic sales tactic,” Watkins says. “Make the hurdle low, get them in the door. Then slowly escalate the level of commitment.” To avoid agreeing to something you’ll regret, try this mantra: “I’ll have to check my schedule. Let me get back to you later.” That gives you time to consider the request and respond on your own terms, by phone, e-mail or in person.

To learn to say no, start by identifying why you always say yes. Some people do it because they fear losing control over any part of a project, says Susan Newman, a social psychologist and author of The Book of NO. Others, like Griesel, are holding themselves to an outdated standard that may not be relevant in their own lives.

An automatic “yes” response is ingrained in many people from childhood, when saying no led to a time-out, Newman says. As adults, many people think saying yes will get them ahead at work. In fact, Newman says most people overestimate the fallout from denying a request, and underestimate the consequences of agreeing. If you say no, someone else will do the job. If you say yes, your other work will suffer. “When people say yes to everything, some project is going to get short shrift,” Newman says.

No Replies to "Getting To No"