Getting To Yes In Colombia 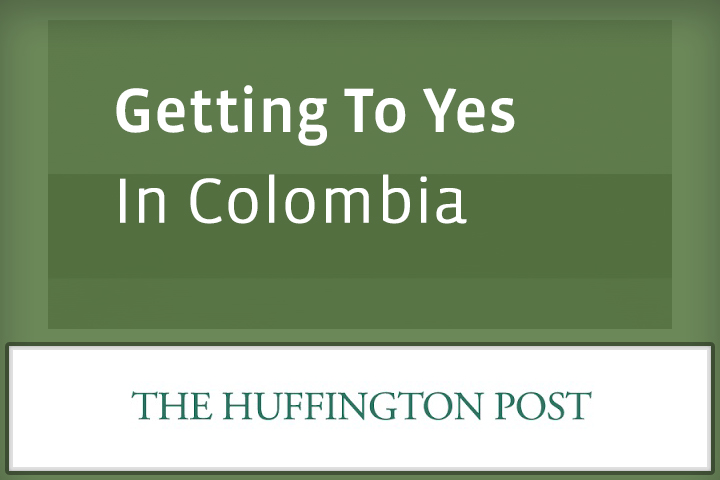 Listen to the podcast on PodBean >>

Nearly five years ago, something happened deep in the Colombian jungle that made this week’s signing of a peace deal possible. It was a first, risky step, relayed to me by William Ury, co-author of a seminal book on negotiation Getting to Yes.

I called Ury in the city of Cartagena, where he is attending the signing of a peace deal today between the Colombian government and the FARC guerrilla force after 52 years of war. Ury has been part of Colombian President Juan Manuel Santos’ “kitchen cabinet” of peace advisers.

In this episode of Wavemaker Conversations: A Podcast for the Insanely Curious, Ury describes an operation, before the peace process became public, to secretly “extract a guerrilla negotiator, someone who would represent the FARC, from the jungle, and bring him to a third party location” where the talks would begin.

One of the government people rented a helicopter, because this had to be done in total secrecy, even secret from other areas of the government, the military and so on. … We came in with a Red Cross official.

The Red Cross official handed the coordinates to the pilot and he flew into the jungle and landed in a clearing. The guerrillas were suspecting a trick…. The helicopter lands and is soon swarmed by hundreds of AK-47 toting guerrillas all pointing at the helicopter. And my friend (from the President’s team) was sitting in the helicopter wondering what to do. He realized the helicopter wasn’t much protection against the bullets. So he decided to get out of the helicopter. He strode up to the commander and said ‘Señor Commandante, I am now placing you under the personal protection of the President.’

In negotiation, says Ury, that is called a reframe.

One of the keys of negotiation is you have that power of reframing — choosing to reframe what seemed to all eyes like a very adversarial situation into one in which they could be possible partners. The commander, despite some of his people being highly suspicious and begging him not to, decided to get into the helicopter, trust this fellow, and they flew off …

And that is how the negotiations began.

William Ury shared another story — an exercise which helped propel and shape the peace process — one which many of us can apply in our own negotiations. It involves putting ourselves in the shoes of the other. Here is the exercise Ury led with the team of negotiators in Colombia.

Start off by imagining, we’ve reached an agreement. And imagine that the FARC leaders … had to describe this agreement — give a talk to all their people, as they’ve just done this past week — in which they describe this agreement as a kind of victory for them. Not that it couldn’t be a victory for the government as well. But it had to be something they could sell to their own troops and explain — look, we’ve been fighting for 52 years, and we’re laying down our weapons. They can’t say it was all in vain. And so, we worked backwards from that speech. We even simulated that speech. I asked the President’s brother to give that speech to us as if he were the guerrilla commander. Then we said, OK, how can we make it easier for them to give that speech. What are the key interests, what are the key needs, that they have?

The government advisory team did the same exercise for itself — asking what concessions the government needed from FARC to satisfy its key interests. That often difficult challenge, of identifying one’s own most critical concerns, is territory William Ury covers in his latest book, Getting to Yes With Yourself (and Other Worthy Opponents.)

As we follow the Colombia peace process, from today’s signing, to next week’s plebiscite in which the public will vote yes or no on the deal — and as we look for lessons from Colombia that can be applied elsewhere — here is one takeaway that emerges from that first journey into the jungle to conceiving of your adversary’s victory speech:

No Replies to "Getting To Yes In Colombia"