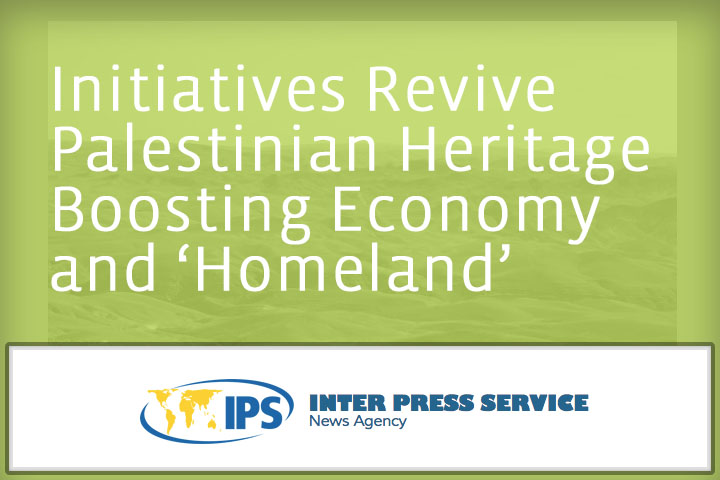 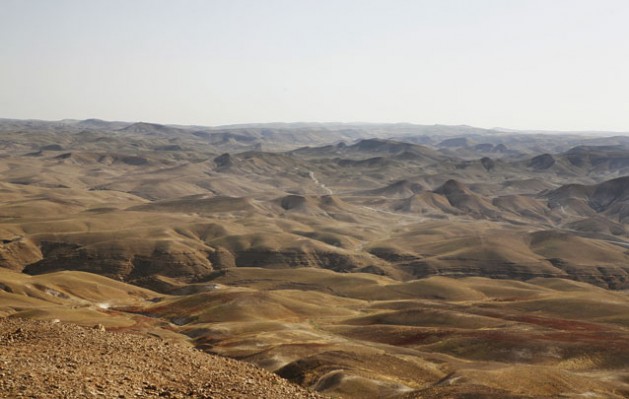 RAMALLAH, Dec 25 2015 (IPS) – Deep into the subtly monochrome landscape of the southern West Bank, Abu Ismaeel’s tent stands out amongst bare rolling hills that stretch into the horizon. A lonely gate, with no fence around it, signals the official entrance to two large tents in the Rashayda Desert.

Abu Ismaeel never dreamed that one day groups of foreign and Palestinian tourists would reach his isolated compound to spend the night. “It’s difficult here,” he told IPS as he poured the customary welcome cup of coffee for his guests. “We have no water and no electricity but we manage to welcome everyone.”

Rashayda is one of 53 communities working with Masar Ibrahim Al Khalil (Abraham’s Path), a Palestinian organization that promotes the West Bank section of a hiking route retracing Abraham’s footsteps across five countries in the Middle East.

With the help of a World Bank grant, Masar Ibrahim has been developing a model of community-based tourism that sees remote and impoverished communities along the path, host and support local and foreign hikers. In the last year alone, hundreds of visitors from all over the world have woken up in Abu Ismaeel’s tent, to the sight of the sun rising from behind the hills of neighboring Jordan.

Rashayda is in Area C, the 60 per cent of the West Bank under full Israeli control. Construction of permanent buildings is not allowed and neither is the upgrading of any infrastructure. Water is brought in by truck and pumped into the pre-fabricated bathrooms by a generator.

So here foreign hikers not only get to experience legendary Palestinian hospitality but also bring in much needed income. George Rishmawi, Executive Director of Masar Ibrahim Al Khalil, explains that for overseas visitors, this trek is also a chance to discover natural beauty and get away from simplistic media representations of Palestine as a land of conflict or religious sites.

“We create direct links between guests and hosts, we bring people close to our flora, fauna, our culture and traditions.” The path is clearly marked and maps or GPS routes are available. The various sections can be tackled Independently or with a guide, on single and multiple-day trips, while the full length requires 2 weeks to walk.

In the West Bank, Rishmawi stresses, the path is very much unique for being the only route that unravels uninterrupted by checkpoints for 334Km, from Jenin in the north to the tomb of Abraham in Hebron.

The largest chunk of it criss-crosses Area C where, Rishmawi told IPS, “if there were no illegal settlements and army bases, our work would be enhanced tenfold.” Still, to have a safe, uninterrupted path developed despite the invasive presence of Israel’s occupation apparatus, explains Rishmawi, has particular symbolic importance for Palestinians.

“We have been restricted from travelling in our own land for the past 15 years,” he said, referring to restrictions imposed by the Israeli authorities since the second intifada. “There’s a whole generation that doesn’t know their own country. So we show young Palestinians how beautiful it is here and at the same time we fight unemployment in the communities we work with, so they won’t leave.”

Near Ramallah, another home-grown initiative seeks to reclaim Palestinian natural heritage, promote a culture of conservation and reinvigorate the increasingly tenuous link that many urban Palestinians have to Area C.

Mashajar Juthour, is an arboretum located on a hill outside Ramallah on the Thaer Al Ogde mountain. The project began two years ago, when Saleh Totah and Morgan Cooper poured their life savings into the purchase of the land.

The 2.5 acres site hadn’t been tended for some 18 years and according to Israel’s interpretation of the Jordanian laws governing the area could have been eligible to be acquired as state land and set aside for new settlement construction.

“It was really important to reclaim the space,” Cooper told IPS. Totah’s is one of the funding families of Ramallah and in buying the land, the couple wanted to return a piece of history to the very community whose ancestors had built the hill’s retaining stone-walls and terraces.

Mashajar Juthour is an educational, cultural and environmental project “We want to get people from the community to come to the land, particularly families, because if children aren’t the ones that you teach to become stewards of the land you really have no future for protecting that land,” explained Cooper.

The couple and a handful of volunteers have begun transforming the once abandoned hill into an arboretum by planting native trees, “With a focus on plants that attract birds, in order to reinvigorate the eco-system,” explained Totah. “But we are struggling so much, because there is no water.”

This being Area C, essential infrastructure work that would launch the site as a Palestinian eco-park cannot be carried out. “People ask us to fix the dirt road that leads up the hill but it’s not allowed. We need to run an electricity line and get water up here but it’s not allowed. We would like to build a rain harvesting cistern, but that’s also technically illegal,” said Cooper. “Palestine is historically ‘fellaheen’ (agricultural society), water is a necessary resource but today we have settlements sitting on top of the aquifers.”

Looking back on the past 2 years, the couple can list plenty of the setbacks but thanks to the support of private individuals and small grants, they are able to attract visitors through activities such as astrology night camps and workshops on stone wall building, grey water systems, beekeeping or tree planting.

Cooper and Totah want to provide visitors coming to Area C with an experience of the land, and homeland, as a living entity that nurtures and needs nurturing rather than as a static ideal or a memory of something lost.

A recent Dabke (traditional dance) event on the hill offered a metaphor for their mission when following a flawed performance, one of the young dancers told Cooper ‘we can do much better on a stage.’ To this, she answered ‘habibi (dear), Dabke came from this dirt and the best Dabke you’ll ever dance was today on this dirt.’

At Mashajar Juthour, explains Cooper, talking about Palestinian natural heritage means talking about the identity, culture and traditions that came out of the relationship to the land. “So that kids don’t think that Dabke danced on a theatre stage is better than Dabke danced on the dirt.”