Know how to Say “No” 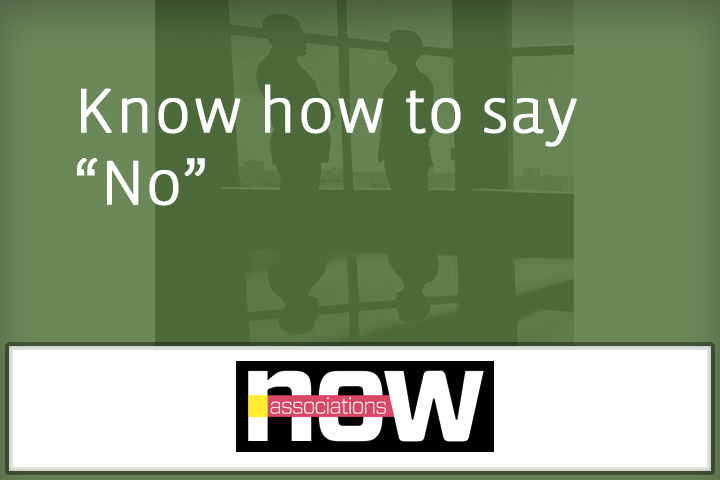 During renewal time last year, Lauren Hefner, director of membership, marketing, and communications at the Laboratory Products Association, along with her boss, realized that a longtime member of their trade association was given a discount on membership dues years ago by a former employee—and that the discounted rate was still in effect. “It was less than half of what other organizations the same size were paying,” she says.

As newer employees to the two-staff organization, the pair was faced with the tough decision of whether to battle a 50-year member over $1,000. “We didn’t want to lose them as a member, but we were also afraid that another member would find out. In addition, despite years of effort, this member company had become largely uninvolved due to an aging executive staff—not attending meetings or even responding to most emails,” Hefner says.

So what did they decide? They told the member company that despite an email from years earlier stating that it was grandfathered into this dues rate, 2010 would be the last year the rate would be in effect. In other words, they said “no.”

“They fought us on it tooth and nail, and we had basically written them off for future membership years,” she says. “Imagine our surprise a few weeks ago when we received a check in the mail for their 2011 dues—at the correct dues amount.”

And while Hefner admits that her situation had an unexpected happy outcome, she agrees that sometimes you may have to say “no,” even if it makes a member unhappy, when it’s best for the association. “A good member will not only recognize that the association must use good business practices, but also will often realize they probably make the same type of decisions within their own company,” she says. “If they’re truly invested in the association, they will understand and want the association to do what’s best for the group as a whole.”

Saying “no” is not only difficult when it comes to members; imagine having to say it to your coworkers, volunteers, or even your boss. While saying no may never be easy, you can say it in ways that will make it clear that you have the best intentions in mind and will avoid negative consequences.

Why It’s So Hard to Say

It may only be two letters, but “no” is a powerful word, which often makes it difficult to say. “The primary obstacle to saying no is fear,” says William Ury, Ph.D., author of The Power of a Positive No: How to Say No and Still Get to Yes. “We’re afraid of somehow damaging the relationship or losing the possibility of agreement, which we need with our boards and volunteers.”

Susan Newman, Ph.D., a social psychologist and author of The Book of NO, agrees. “People think they are being judged as selfish if they say no and believe they will be ousted from a group forever if they say that word,” she says. “While in some cases people avoid no because they don’t like to give up control, most of the time it’s because they’re avoiding confrontation.”

Ury says it’s not surprising that people are afraid. “After all, most aren’t very good at it,” he says. He lists three classic mistakes people make when they want to say no:

Saying no can be particularly difficult in associations. “We exist to serve our members, so when a member asks for something, you don’t want to tell them no,” says Becky Granger, CAE, director of information technology and member services at Educause. “But our job is to provide the most impactful items to our members, so we have to apply a critical lens and select what makes the most sense” for the organization.

How to Say It

While most people would like to avoid saying no, it’s unavoidable. “Just remember for every yes you say, you are going to have to say no to something else,” says Newman.

However, there are better ways to go about it. Ury calls his approach the “positive no.”

He suggests sandwiching the no: Begin with a yes, put your no in the middle, and then end with a yes. “A true positive no is a no where you’re actually saying yes to something more important. Your yes is your values and core needs and what’s best for the organization’s values and mission,” he says.

Here’s an example of the sandwich approach: Imagine you’re being asked to work over the weekend, but you have an important family commitment. “Say, ‘Because I have this very important family commitment, I am unable to come to the office on Saturday, but I can work late this week to get it done and ask Mary to help out,'” Ury says. “It begins with a yes to what your core value is; proceeds with a very calm, neutral no; and then it ends with a yes about something you can do to help or some gesture of respect that allows you to say no but still preserve the relationship.”

After you deliver your no, Newman says, as bad as you may feel, it’s important to keep in mind that the person you said no to most likely isn’t thinking about you. “They’re really moving on to finding someone who can help them. Sure, the person may be panicked initially, but the asker moves on and is not sitting there thinking you’re a terrible person,” she says.

But what should you do if the person you have to say no to is one of your association’s volunteers or your boss?

Megan Backes, manager of professional chapters at the American Marketing Association, deals with chapter volunteers regularly, which means she also has to say no to them. “Sometimes the national organization doesn’t have the resources to develop or support something [the volunteers] want to offer,” she says. “Instead of saying no, it is important to help them understand it is a matter of prioritizing all the requests and desires. Involving the volunteers in the prioritization process helps get buy-in … and it allows them to see that it is not just staff who say something isn’t a priority, but other volunteers sharing that thought.”

Backes adds that when you say no, you still need to make sure volunteers understand that you listened to their request and understand their point of view. She suggests associations make note of the ideas, so they can be followed up on or reconsidered in the future. “I’ll also ask them, ‘What alternative solutions can we provide or pursue that might still help you achieve your goal?'”

“It’s really important that the person with the idea feels heard and that they know their idea will get into the process for discussion,” says Granger. “Everyone understands that we can’t do everything, and if they know they were heard, they will be more likely to continue to think big.”

When you need to say no to your boss or perhaps another higher-up in your organization, Newman suggests asking for his or her input instead of saying no immediately. “Say to them, ‘This is what I have on my plate currently. Can you tell me what my priorities should be so I can possibly help you out?’ This will show them that you’re not only open to help them but that you also have your other work in mind.”

What If You’re Told No?

While your approach to saying no is important, so is your reaction if you’re on the receiving end. “A good boss is one who allows others to say no to them and respects employees for having the candor to say it,” says Ury. “Equally important is having a culture that allows people to say no.” [See sidebar on page 24 to read how one association has built such a culture.]

If you do receive a no, the first thing you should ask is why. “It’s OK to not accept no as the first answer. In fact, as a leader, you will want to probe and see if you can change no to yes. You should be curious about why the other side is saying no,” says Ury. “You want to listen to the no and hear it. It doesn’t mean you have to accept it, but you want to listen to the reasons before you proceed to try to persuade the person the other way is better.”

However, persuading to the point that a person feels like she has no option but to say yes is not a good approach. Instead, you may want to ask what else is on her plate and work together to see if projects and priorities can be adjusted.

Ury says the common ground between saying no and receiving no is respect. “Respect is the cheapest concession you can make in any negotiation because it costs you nothing and gains you everything,” he says.

Association professionals are in an environment where they’re being asked to do so much so fast; unless they can say no to lower priorities and accept the nos they receive, they can’t achieve what’s most important to their organizations. “Good leaders are the ones that know how to say no—but in an objective way and in a way that advances and preserves relationships,” says Ury. “Saying no is a way of assuring your yeses in life.”

While the ability to say no is important in associations, so is having an environment that accepts no and understands when someone is saying it for the right reasons.

“In my previous position, I was responsible for IT, so it was a constant challenge to not be the ‘Department of No,'” says Becky Granger, CAE, director of information technology and member services at Educause. “Our staff have lots of great ideas, but it’s just not feasible to try to implement every great idea.”

To decide which ideas to pursue, the organization has core teams that look at whom the idea would benefit and how much. “Ideas that would benefit a large number of members in a big way will be prioritized over other ideas, and some ideas just don’t make the cut,” she says.

Additionally, Granger says some staff have personal preferences about how they like to use technology tools and sometimes ask for special access to the team or help on apps that her team wouldn’t usually support.

“Instead of telling the staff member we don’t support that app, we have a ’15-minute rule’ where we will provide goodwill help for up to 15 minutes, but after that the staff member is on their own,” she says. “This is enough time to solve most problems … and staff are generally quite grateful for the assistance. This tactic allows us to be responsive and helpful but with a time limit for the ‘special cases.'”

Sometimes just hearing the word “no” can put a person on the defensive. Try these phrases instead to keep the conversation open.