In Budget Talks, Getting to ‘Yes’ 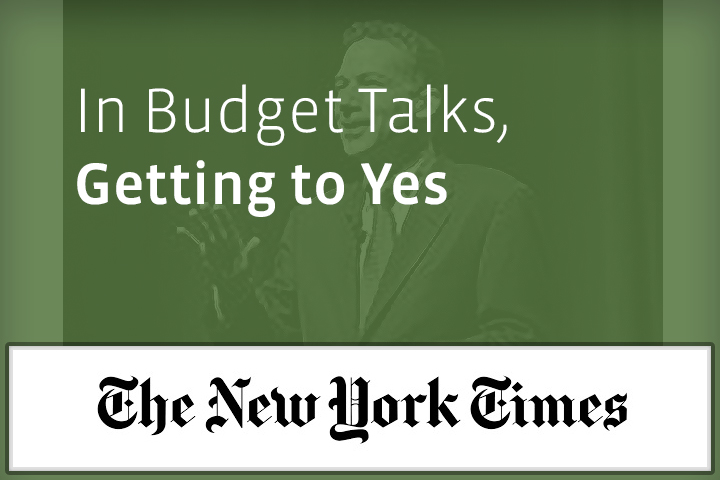 They agreed Friday to postpone their showdown with President Obama for three months after initially vowing there would be no deal on raising the debt ceiling without spending cuts. But before they and the Democrats embark on yet another round of contentious and seemingly dysfunctional tax and budget talks, here’s a simple suggestion: a crash course in negotiating tactics.

When I broached the idea to Daylian Cain, who teaches a popular class in negotiating at the Yale School of Management, he immediately volunteered to take his course to Washington. “I’ll show up with my PowerPoints and a bottle of Scotch,” he said.

What might President Obama, House Speaker John Boehner and the Senate minority leader, Mitch McConnell, the most vocal participants in the latest standoff, learn? Perhaps that they’ve been falling into some classic but avoidable pitfalls, and that they could achieve some of their most important goals without subjecting the financial markets, the American people and the global economy to yet another high-stakes and damaging game of chicken.

“This isn’t rocket science,” William Ury told me this week. Dr. Ury, along with Roger Fisher, who was a law professor at Harvard at the time, wrote the classic work on negotiating, “Getting to Yes,” and has been refining his insights at the Program on Negotiation at Harvard Law School. “It’s sad to watch this kind of brinkmanship,” he said. “There are plenty of ways to arrive at a good, responsible agreement that’s satisfactory to each side and, above all, is good for the country. You could put some high school students together and they could do it.”

Seth Freeman, who teaches negotiation and conflict management at Columbia Business School and N.Y.U.’s Stern School of Business, added: “I’m marveling at the postures each side is taking, given the stakes. It gives you vertigo.”

Mr. Obama and the Republican leaders have shown scant evidence that they’ve absorbed any of the lessons that are now standard fare in the nation’s leading law and business schools. In each successive round of talks, they’ve expressed mounting anger and frustration, which only creates “huge and unnecessary obstacles to reaching an agreement,” Dr. Ury said.

Until the Republicans gave in on Friday, their positions seemed only to have hardened. Mr. Obama said he wouldn’t even talk to Republican leaders about raising the debt ceiling, saying at a news conference this week that “they will not collect a ransom in exchange for not crashing the American economy.” This is a standard negotiating stance, which is refusing to even discuss an issue, coupled with some provocative name-calling, since the use of  “ransom” suggests that Republicans are pirates or hostage takers.

“If you can convince the other side you are truly committed to your position and there’s no going back, and the other side believes you, you can win. But if not, and they call your bluff, you’ve got a Dr. Strangelove situation. I see similar rhetoric from the Republican side.”

For their part, the Republicans were taking a similarly hard line, at least until Friday. Mr. Boehner said he wouldn’t engage in any more one-on-one negotiations with Mr. Obama, and both he and Mr. McConnell had said they wouldn’t support raising the debt ceiling without addressing the deficit with spending cuts. They also refused to discuss further tax increases, saying that Republicans are “done” with that after the fiscal cliff deal raised taxes on the wealthy.

“You could put some high school students together and they could do it,” said William Ury, who wrote “Getting to Yes.”

Dr. Ury said Thomas Schelling, a former economist at Harvard, compared the standoff to two trucks hurtling toward each other. One driver rips out the steering wheel and throws it out the window.

Professor Cain described the standoff as a “game of chicken” where “each side refuses to swerve.”

Basically, he continued, “this tactic aims at claiming a large portion of the pie: ‘Give me everything or I walk.’ That’s a very aggressive approach, and doesn’t foster creative deal-making at all. There’s no communication, so there’s little chance for a win-win outcome. So far, this has been a vicious circle. Each round of negotiations has been worse than the last and has begotten hostility. Reputations are on the line. Obama is worried about being too soft, so he’s being super firm. Boehner faces a revolt in the House.”

“Maybe they could build some social capital for cliffs to come,” he said.

Dr. Ury added, “So much of what we’re seeing is being driven by emotion, anger, frustration and feelings of betrayal.” In all negotiations, he said, “a key is to distinguish between the people and the merits. It doesn’t have to be so personal. Both sides need to take a deep breath, keep their eyes on the prize, and focus on what will serve their party and the needs of the nation.”

Dr. Ury calls this “going to the balcony,” which means to step back, let emotions simmer down and cultivate a more objective view of what the sides have in common.

Professor Freeman agreed that “you don’t have to like each other to get a deal, even a good one.”

He noted that history is filled with examples of successful negotiations between bitter enemies, like the one that resulted in the Arab-Israeli Camp David peace accords.

What dismayed all the experts I spoke to was that the hostile tone was obscuring the fact that both sides agreed on the two most fundamental issues; the debt ceiling needs to be raised and a government default avoided, and the long-term deficit needs to be addressed through some combination of spending cuts and tax increases.

“They have a lot of common ground,” Professor Cain said. “At the end of the day, these are patriotic Americans who care about their country and are devoting their professional lives to making America better. They’re under partisan pressures, but they’re similar. They can surely sympathize with each other, one would think.”

The three experts I consulted agreed that Mr. Obama had the stronger hand. But for any real progress, both sides need a face-saving way to reach a compromise. Each needs to get something to sell to its constituency. “In any negotiation, you have to think both about how you get what you want and how you help the other side save face.“ Professor Cain said. Professor Freeman added: “How do Boehner and McConnell deal with Tea Party, talk radio, Fox News, their base? If they can find some way to declare victory, some measure of cover, that may be a way out.”

Dr. Ury offered a possible solution: President Obama could agree to begin longer-term debt and spending negotiations now, and Republicans would drop their objections to raising the debt ceiling, without explicitly linking the two. “Both sides get something,” Dr. Ury said. “The president would strengthen his hand and it would be good for the country. He could convey the message that to get spending cuts, you don’t have to hold a gun to the head of the country. The Republicans would be hard-pressed to say no. They can say that spending cuts are back on the table. They could aim for a ‘Grand Bargain’ or maybe a series of smaller bargains.”

That’s pretty close to what the Republicans have now proposed, which is tethering an agreement to raise the debt ceiling to a pledge to engage in long-term deficit reduction.

Lurching from one fiscal cliff to another and the lack of constructive engagement by the nation’s leaders seems to have left all three negotiating experts shaking their heads. “Their behavior seems juvenile, but these are smart people,” Professor Cain said. “I guess there can be stupidity at the highest levels, but when I see something so reckless and scary, I wonder, is there something I don’t know about the situation? I figure there must be more going on, because otherwise it certainly seems scary to me.”

No Replies to "In Budget Talks, Getting to ‘Yes’"