Power to the People – The Electronic Politicos 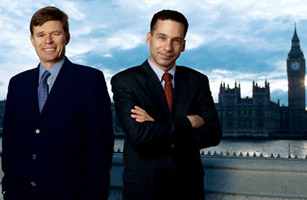 The e-Parliament was hatched in a pub called, fittingly, the Hope Inn. Financial support comes from groups like the Rockefeller Foundation, and consulting firm Booz Allen Hamilton is building the project’s online home.

Nicholas Dunlop and William Ury were deep in typically wonkish chat as they walked near England’s white cliffs of Dover on a blustery afternoon in early 2001. The main topic of conversation, says Dunlop, a New Zealander and longtime leader of international political networks: “How could we help democratize global institutions?” He and Ury, an American and a co-founder of Harvard Law School’s negotiation program, popped into a pub to warm up over tea. Then the pair came up with the idea for the e-Parliament.

At www.e-parl.net, cyberspace is used as a town hall for legislators from around the globe. “Many of our problems are global — climate change, terrorism, trade. You can’t solve them in one country alone,” says Ury, above right, who is on the organization’s board of directors. But, he adds, there had been no forum in which legislators could discuss shared problems, “no way for M.P.s to learn among themselves, no Google for politics.”

Membership in the e-Parliament is open to the world’s 25,000 democratically elected national legislators, including those in the U.S. Congress. Though the group is still at what Ury calls “the level of experiments” as organizers figure out how best to harness e-mail, web chats and intranets to serve members, several hundred lawmakers have already signed on, representing countries from Brazil to India. Nonlegislators can join a related forum, paying a fee that depends on the size of their organization. The goal: to devise common solutions to common challenges.

Collective problem solving makes sense, says Dunlop, the body’s secretary-general: “If you were a management consultant advising legislators, you wouldn’t say, ‘Divide up into 130 groups and solve a problem 130 times without communicating.'” So the e-Parliament is setting up a database that will allow legislators to search for like-minded colleagues — those working on, say, early-childhood education or counterterrorism issues. “This won’t do away with face-to-face interaction, but it will supplement it,” says Ury.

The e-Parliament is already having an impact. For legislators who want to create a movement beyond their borders, it is launching action networks for lobbying and strategizing. Its climate action network’s first project is to promote global norms for energy efficiency; the legislators want to limit globally — to 1 watt — the amount of power an appliance consumes while in standby mode. Sound minor? International adoption of that standard alone would save billions of dollars and dramatically reduce electrical demand. In March 2003 Norwegian M.P. Ingvild Vaggen Malvik became the first to turn an e-Parliament discussion into potential law when she took that energy-efficiency issue to her legislature. As the e-Parliament grows, good ideas about government could prove contagious.

No Replies to "Power to the People - The Electronic Politicos"