Negotiation Expert William Ury Tells How to Get to “Yes” 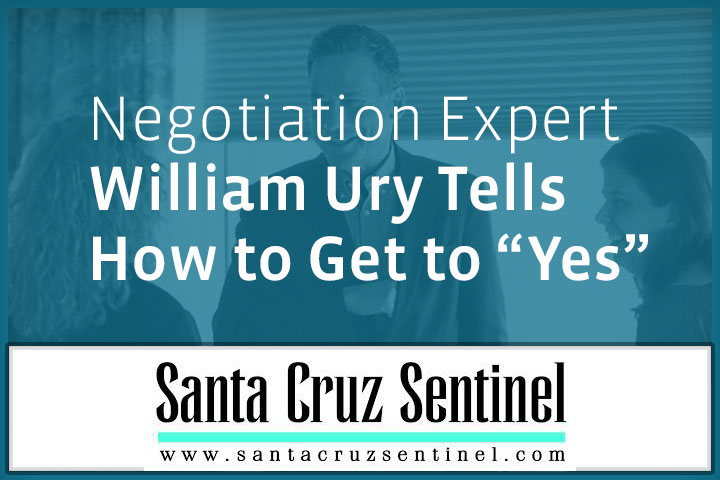 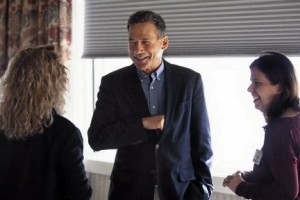 For internal, 95 percent of hands went up.

“The more internal the negotiation, the more difficult we perceive it to be,” said Ury, who became an anthropologist after spending his junior year at UC Santa Cruz and studying with professor Triloki Pandey.

Ury shared three stories to illustrate solutions, the first being “go to the balcony.”

Called to Venezuela by then-president Hugo Chavez facing demands he resign, Ury waited three hours to be ushered in.

Furious at Ury’s opening remark, Chavez went on a tirade during which Ury asked himself, “Is it in my interest to get in an argument with the president of Venezuela?”

“After 30 minutes, I saw his shoulders slowly sink,” Ury recalled. “He said, ‘Ury, what should I do?’ That is the sound of a mind opening.”

Ury suggested a truce for the holidays, which Chavez accepted immediately.

In Brazil, the 76-year-old leader of a retail business was fighting his partner for control of a company with 150,000 employees.

When Ury pressed the executive to explain what he wanted most, he said “freedom to pursue his business dreams and spend time with family.”

Ury took that insight to talks with the partner in Paris, asking for agreement on the principles of freedom and dignity.

Within a week, “we had both men signing an agreement wishing each other well,” Ury said.

The third story was about three brothers fighting over an inheritance of 17 camels. The oldest was to get half, the middle a third and the youngest a ninth, but each wanted more.

A wise woman gave them a camel, so the eldest got nine, the middle son six and the youngest two. The leftover camel, they gave back to the woman.

“If we can learn to step to the balcony, reframe the situation and look for the 18th camel, that 18th camel might be us,” Ury said.

Ury answered with a story about a startup founder, forced to lay off 500 engineers, met with each one, explained he ran out of money, and asked “How can I help you?” offering a letter of referral or training opportunity.

“The cheapest concession in negotiations, so often missed, is to give the other person respect,” Ury said.

Greg Pepping of the Coastal Watershed Council, seeing relevance to his work with the city and the San Lorenzo River Alliance, said, “I will try to eliminate my own doubts.”

William Ury, co-founder of Harvard’s Program on Negotiation and author of“Getting to Yes with Yourself and Other Worthy Opponents,”offers this advice.

Go to the balcony: Observe and listen rather than reacting and allowing your inner critic to dominate.

Put yourself in your own shoes: Before a sensitive phone call, ask: What do you want to accomplish? Uncover your basic needs.

Commit to take care of your needs no matter what: Then you’re not so dependent on others.

Change the game: Search for mutual gain. A win inside ourselves creates preconditions for us to get to yes with others.