Saying No to the Pope: A Wavemaker Conversation Featuring Michelangelo & William Ury 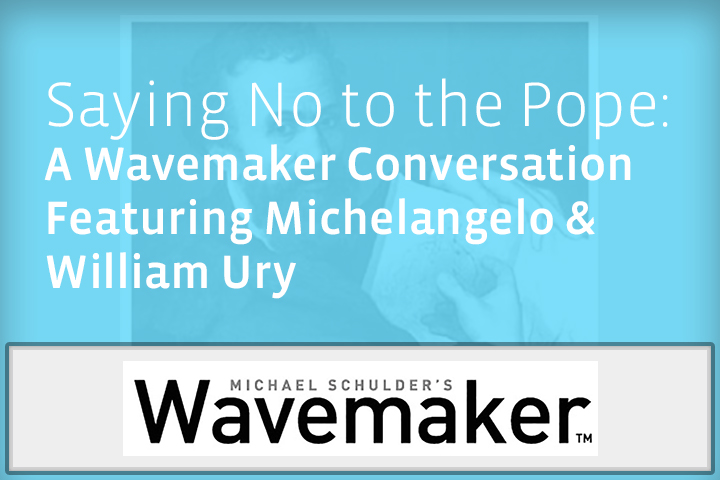 I recently learned that Michelangelo said no to the pope – a no delivered in an impassioned letter that has resurfaced.

I quickly forwarded Michelangelo’s 16th Century letter to the 21st Century mediator and negotiator who has made his reputation getting to yes, William Ury.

Ury concluded the letter is a superb example of what he calls a Positive No – a model that can empower us all, professionally and personally.

He shared his insightful and colorful analysis with me on this episode of Wavemaker Conversations: A Podcast for the Insanely Curious.

The letter was recently circulated widely by Maria Popova on her inspired website Brainpickings. Popova writes:

“In 1505, thirty-year-old Michelangelo was commissioned to build a tomb for the newly elected Pope Julius II in Rome. It was an arduous process marred by constant interruption and interference by the pope, a bona fide micro-manager.”

Michelangelo found the working relationship intolerable. So he left Rome and moved far from the pope — to Florence. He followed his move with a letter to the pope’s chief architect, a message directed at the pontiff himself. Among the highlights:

“… let His Holiness understand that I am more willing than ever to carry on with the work; and if he wants the tomb come what may, he shouldn’t be bothered about where I work on it, provided that, at the end of the five years we agree on, it is set up in St Peter’s, wherever he likes; and that it is something beautiful, as I have promised it will be: for I’m sure that if it’s completed, there will be nothing like it in the world.”

“Now if His Holiness wants to go on with it, he should place the deposit for me here in Florence and I’ll write to tell him where … Even if it meant a serious loss to me, I shouldn’t mind so long as I could do the work here; and I would forward the finished pieces one by one so that His Holiness would enjoy them just as much as if I were working in Rome.”

Enter William Ury, co-author of the classic book on effective win-win negotiation Getting to Yes, as well as The Power of A Positive No and his most recent Getting to Yes With Yourself (And Other Worthy Opponents.)

Here is Ury’s take on the relevance of Michelangelo’s Positive No in our time:

“In this day and age, maybe the word we need most to wield is the word No. It is the most powerful word in the language. But because it is so powerful, it is also potentially the most destructive. But if we can make it a positive word, then we can transform our lives like Michelangelo did 500 years ago.”

A Positive No, says Ury, has a particular structure. He calls it The Yes-No-Yes sandwich.

“It’s a no that paradoxically begins with a yes. In this case, Michelangelo, his yes is really clear. It’s his creative integrity — the beauty that he envisions. He’s making that very clear. This is why he’s leaving. This is the why. This is what he’s standing up for. … It’s shining through this letter.”

“Then, the second part of the no is the no itself, which is very calm, very respectful, very matter of fact. Not antagonistic, not rejecting. It’s simply in service of that larger yes, which in this case is creative integrity. So he’s saying, for the sake of what I have to deliver, the beauty I’m gonna deliver, I need to be able to say no to staying in Rome. I’m gonna be in Florence.”

“And then a positive no ends not on the no, but on a yes, which is a yes to the relationship, a proposal back to the other side.”

My conversation with William Ury occurred shortly after he returned from Colombia, where he has been serving as a mediator in the hemisphere’s longest war.

On our Wavemaker podcast he shares how Positive No’s are helping the Colombian peace process reach what he believes could soon be a tipping point.

As for Michelangelo’s no, Ury observes that the artist had essentially asked himself the following:

“How do I contribute what I need to contribute to the world, given the fact that I have to deal with micromanagers and asymmetrical power?”

He does it through what Ury calls this “pearl of a Positive No” that, as you’ll discover listening to our conversation, led to a far more impressive yes than either Michelangelo or the pope initially imagined.

MICHAEL SCHULDER is the host of Wavemaker Conversations: A Podcast for the Insanely Curious. You can subscribe for free here on iTunes

No Replies to "Saying No to the Pope: A Wavemaker Conversation Featuring Michelangelo & William Ury"