How To Negotiate Out Of Shutdown Stalemate? ‘Getting To Yes’ Author Has Advice 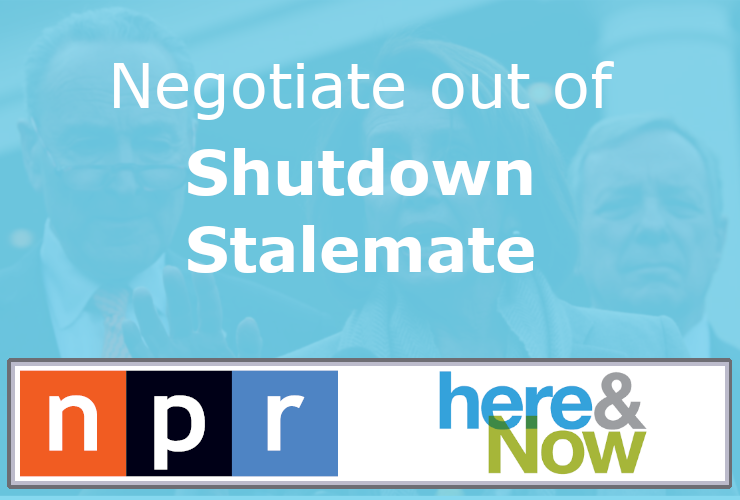 What do you do when talks are going nowhere?

Amid the weekslong government shutdown, William Ury, co-author of the book “Getting to Yes,” a classic in the art and science of negotiations and diplomacy, has some advice for President Trump and Republican and Democratic leaders in Congress.

Start with victory speeches — and then work backwards.

“You write President Trump’s victory speech in which he says to his base, ‘I won,’ and you write Nancy Pelosi’s victory speech in which he says to her base, ‘I won,’ and then you work back from that and say, ‘OK, how do we arrive at a deal that has enough in it for both sides that … we can get on with our business and the federal government can resume?’ ” Ury, co-founder of Harvard University’s program on negotiation, tells Here & Now’s Jeremy Hobson.

Even though the debate over border security at the heart of the shutdown appears to be two-sided, Ury (@WilliamUryGTY) says there’s a third party with a significant amount of bargaining power yet to be exercised: the American people.

“The American people are being held hostage by this negotiation,” Ury says. “And if we can learn to speak up … if we make our voices known to our members of Congress in social media and so on, we will speed up the process, because … both sides will see that they’re losing more by playing the blame game, than by engaging in a negotiation that addresses the genuine interests at stake.”

On the state of the negotiations around the government shutdown

“It’s a classic win-lose contest, which almost inevitably, in my experience, ends up in lose-lose outcomes. Each side thinks they’re going to win, but neither side’s going to back down, so both sides end up losing. And actually, the people who lose the most are us: the citizens, the community, the federal employees, all the people who will be suffering even more from the federal breakdown. That to me is the key in the negotiation: The secret to solving this is not just the parties. It’s us.”

“The secret in negotiation to me is to separate — it’s almost like you draw a line in your head between the people and the problem.”

On the importance of managing emotions during negotiations

“I do think that eventually both sides will reach an agreement. The question is, how much pain does there have to be? And the pain is primarily borne by us, by the American people — and by particularly those who don’t have their jobs right now or are not receiving some critical government service. To me, that’s the key in any negotiation.

“Right now, what we need to do is we need to be able to step back — step to the balcony, I call it. In other words, a place of calm, a place of perspective, a place where we’re not reacting, a place where we can see the big picture and we can focus on the prize. Clearly, both parties in this case are not on the balcony. But what we need to do — we the third side, we always think of negotiation as two-sided, in this case it’s Democrats versus Republicans, the president versus Pelosi. But the key is there’s a third side, which is the surrounding community, which is us. In this case, both Nancy Pelosi and Donald Trump, they’re playing to us.”

On what his advice to Trump would be

“It would be, write my own victory speech: ‘What do I need to be able to say to tell my base that I won?’ Write the other side’s victory speech, and then try to design a process so that we can find a way out of the situation in which each side emerges intact and ready to fight another battle, if need be, the next day. But let’s move on from this, let’s really get past this imbroglio, because it’s going to hurt everyone and it’ll hurt everyone even more when there’s a real crisis — imagine something happens, like there’s a national security threat, something like this.

“The secret to solving this is not just the parties. It’s us.”

“We have to wake up, come to our senses. We have to come together, and in fact to me, this is a wake-up call for all of us. There’s a polarization — a very dangerous polarization — in the country right now, which if we don’t address it and come together and speak up, the third side, the community, then things could get a lot worse.”

“Very difficult. It’s really difficult to negotiate in a fishbowl where you’re in front of cameras and so on, as we’ve seen. The best way to do this, to me, if I was President Trump, is I would appoint a couple of what I call ‘wizards’ — people whom I really trust — [and] ask the speaker to appoint a couple of wizards, too. They go off somewhere and they brainstorm, they look at the interests … they write those victory speeches. And they come back and make recommendations to both parties that allow for an off-ramp, allow for what I call ‘building a golden bridge,’ making it easy for both sides to back down, in some sense, to back away towards a solution that works for everyone.”

Chris Bentley produced this interview and edited it for broadcast. Jack Mitchell adapted it for the web.

No Replies to "How To Negotiate Out Of Shutdown Stalemate? 'Getting To Yes' Author Has Advice"