Turn Down Requests With Finesse 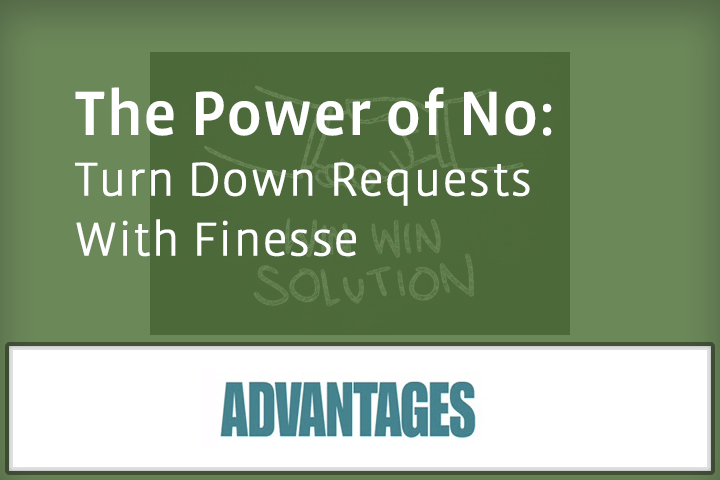 Certain sales situations call for a thumbs down. But you can say “no” to your clients without actually uttering that word. Here’s how to frame the conversation in ways that build trust and strengthen long-term relationships.

While sales reps strive to make the customer happy, that doesn’t mean always saying “yes” to their requests. Agreeing all the time can lead clients to believe they can get anything, anytime, without valuing the relationship or your worth as a consultant and expert in business branding and promotions. It’s a paradox – you want to delight customers but may need to help them rethink their ideas occasionally.

Advantages spoke with sales reps about how to tactfully say “no” and increase their importance in their clients’ marketing efforts as a result.

STEER THEM IN THE RIGHT DIRECTION

Sales reps may need to nix an idea due to quality control, short timeline or poor fit with the customer’s brand. When an insurance customer asked Denise Graziano, president of Graziano Associates LLC (asi/213121) for a polo shirt for an event, their price point was not consistent with the quality of their brand. 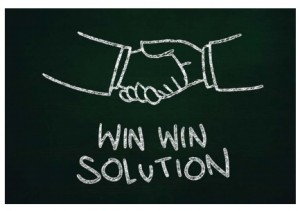 She told the client: “If you want people to remember this and not have it be something they clean the house in or clean the garage in, you want to make it a better quality product.”

Graziano searched for alternatives and found a high-quality shirt at a low price because it was discontinued. Fortunately, production went smoothly, resulting in attractive shirts on budget and without reducing quantity. 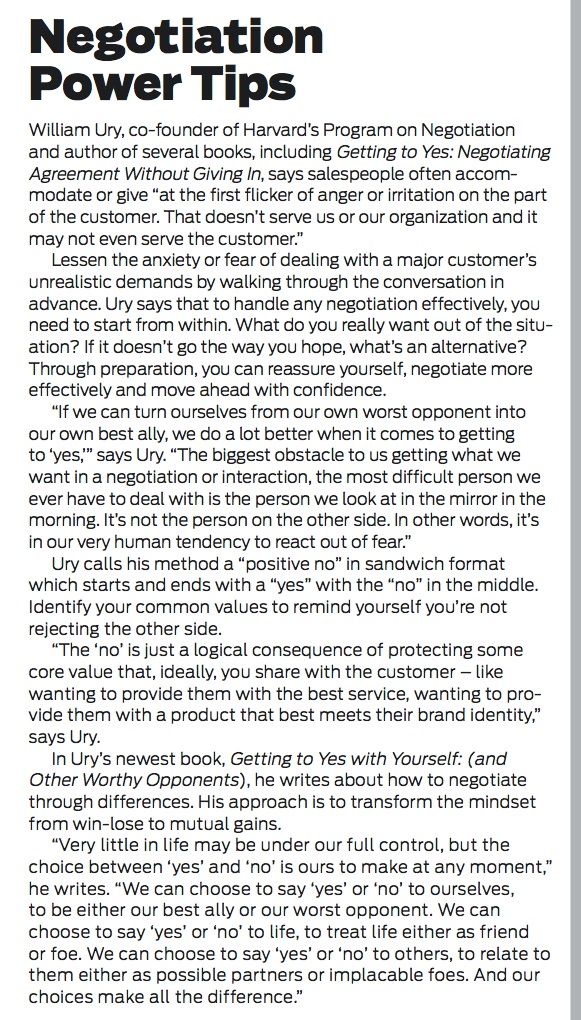 “They were appreciative of the fact that we didn’t want them to hand out shirts that would ultimately make them look bad,” she says.

One sales pro convinced a real estate client that a tote bag would be a better option as a giveaway at an outdoor event than the pen they had their heart set on. “Their goal was to increase their brand visibility throughout the community. But people are going to take a pen home and put in a drawer,” says Brian Waligora, senior account director at Pure Marketing Group (asi/302553).

Graziano says that while Sales reps may feel uncomfortable giving a thumbs down to a client who’s excited about their idea, position your approach so they know you want their ideas to be received by their target markets in the best possible way. “Whenever you approach any of these situations by giving them an explanation that makes sense and an alternative, really it’s always a win-win – I’ve never had it not go well,” she says.

EXPLAIN WHAT THEY PAY FOR

Another promotional products company has had to turn down customer requests for lower prices. PromoPros/IncentPros Inc.’s (asi/300654) business model is to sell items at fair market value and provide a high level of personalized service. That could entail meeting FedEx on a loading dock on a weekend or delivering to a customer’s house. The company doesn’t “play the price game” or order items that they know are not well-made or from a reputable vendor.

“They do listen to us because we’ve become consultants instead of just selling things,” says Leslie Roark, president. She also likes to build “wiggle room” into the project timeline so her company can fix problems if anything goes wrong.

For example, one client wanted a Red Carpet premier launch of their new corporate program to employees. They wanted to give microwave popcorn, candy and a Redbox movie voucher, all from different suppliers, in a cute package. But when the client gave the go-ahead, the event was only one week away. So Roark suggested an alternative – a pre-packaged striped “movie theatre” popcorn box with treats already in it. That reduced time by using one supplier and a ready-to-go package. Her team made one enhancement by adding Redbox ticket vouchers to the outside of the boxes.

“The client ended up saving in packaging and labor costs too,” she says. “The event was a huge success, and our client was extremely happy.”

Another sales pro says it’s fairly common to have to veto price expectations when customers reach out to him after cruising the Internet, because they haven’t noticed the hidden costs. Customers have one price in mind without knowing it’s actually higher due to delivery, setup charges and other production fees.

“If you have buyers who like to source on their own, you typically have to steer them in another direction on occasion,” says Noel Garcia, managing director at Boundless Network (asi/143717) in Austin, TX.

When a longstanding client told Garcia he could get a product cheaper, he was skeptical. The client, in the funeral home industry, had already placed a couple $250,000 orders for custom keepsake photo albums, but later told Garcia another rep could get the album at a much lower price. Sure, but was it the same high-quality piece he supplied?

He told the customer he couldn’t meet the price and advised him to obtain a prototype before placing the several-thousand-item order. A few weeks later the client called saying the cheaper album was indeed inferior quality.

No Replies to "Turn Down Requests With Finesse"