Outside View: A Third Alternative in Iraq 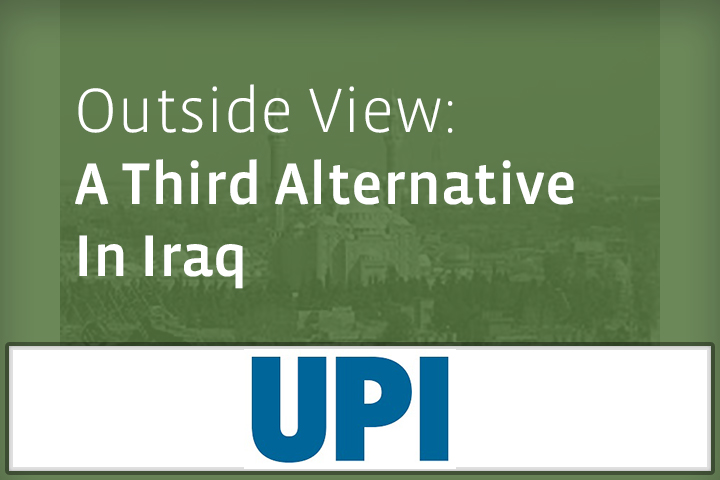 The public debate on Iraq is framed around two main alternatives: to stay or to withdraw. Neither solution is particularly attractive.

If we stay, we further inflame violence and resistance. We are not wanted there by the great majority of Sunnis and Shiites. And we continue to spend precious lives and treasure.

If we simply leave, however, we risk making the situation worse, leaving behind a failed state, a haven for our enemies and a spreading civil war.

Faced with these options, it should come as no surprise that most Americans are uncertain about just what to do. We feel stuck in a terrible trap.

There is, however, a third and much more promising approach, mentioned by some, but never given the full and proper attention it deserves in the public debate.

The peacemaking process would take the form of a standing peace conference, an ongoing forum under the auspices of the United Nations, involving all the stakeholders, barring none. Such a conference would offer an umbrella for informal as well as formal negotiations, creative deals and unlikely coalitions that together could lead to agreement.

The chair and architect of such a conference would be an international diplomat such as U.N. Ambassador Lakhdar Brahimi, a master negotiator who has already shown how to assemble a third side for effective peacemaking in war-torn Afghanistan and Lebanon. The peacekeeping process would take the form of a peacekeeping force from the Arab League and the United Nations, which, with the invitation of the Iraqis, replaces our troops.

It will be far from easy to reach agreement. What makes it conceivable, however, is that, even as the parties’ short-term interests appear to diverge sharply, the reality is that each of the major groups in Iraq has a lot to lose from a worsening civil war as does each of the neighboring countries, especially considering the danger of a wider Sunni-Shiite war.

However difficult, a third side approach is worth pursuing for it offers perhaps the only realistic chance to bring the civil war to a negotiated end while containing the worst violence and preventing a wider regional escalation. And it allows us to withdraw in a responsible manner without making matters still worse.

There is a price for us to pay, of course. In order for the third side to get engaged, we need to do something at once very difficult and very simple. While it does not cost us a life or cent, it demands from us a measure of moral courage and honesty.

Just as you cannot expect a friend or neighbors to help you in a self-inflicted emergency if you’ve previously ignored all their appeals and advice to you, so we cannot expect the world community to come to our aid — unless we take the first courageous step of facing reality, acknowledging our mistakes, assuming our responsibility, and asking for help.

A request for help to the people of Iraq and the world community requires us:

— To announce we have no intentions to maintain a military presence in Iraq and to make clear we are ready to leave at any time.

— To call for a U.N. standing peace conference to determine how best we can withdraw our forces without further destabilizing the situation.

— To offer to pay for and support in all ways an internationally legitimated peacekeeping force and an economic rebuilding effort in Iraq.

Many may feel it is impossible to expect President Bush to make such a request. But all that is needed is, in fact, what candidate George W. Bush called for in 2000 — a “more humble foreign policy.”

As we weigh the merits of staying versus withdrawing, the third side approach deserves our full public consideration. Whatever we would pay, it would cost us so much less than we are currently spending in lives and treasure. And we have so much to gain — a chance to put this tragic chapter behind us, to heal our wounds, and to make the world safer for us and our children.

(William Ury directs the Global Negotiation Project at Harvard University. He is co-author of “Getting to Yes” and author of “The Power of a Positive No.” This article is distributed by the Common Ground News Service.)

No Replies to "Outside View: A Third Alternative in Iraq"