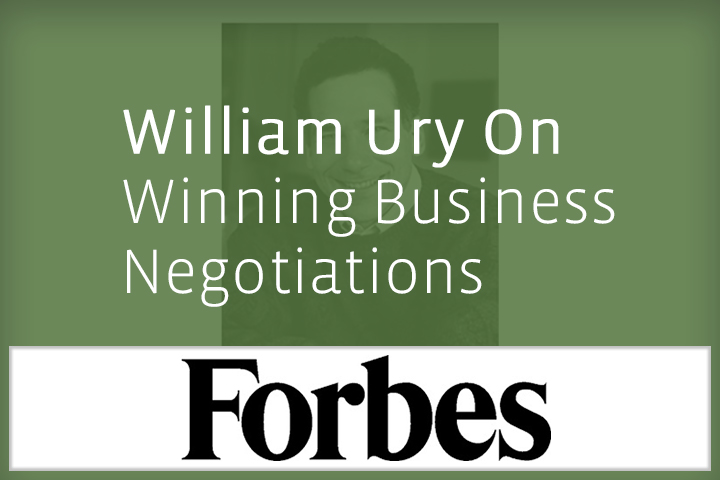 I recently caught up with William Ury, who co-founded Harvard’s Program on Negotiation and is currently a Senior Fellow of the Harvard Negotiation Project. He is the author of The Power of a Positive No: How to Say No & Still Get to Yes (2007) and co-author (with Roger Fisher) of Getting to Yes: Negotiating Agreement Without Giving In, an eight-million-copy bestseller translated into over thirty languages. This month marks the 30th anniversary of the book, which has been re-issued in a revised 3rd edition.

Over the last 30 years, Ury has served as a negotiation adviser and mediator in conflicts ranging from corporate mergers to wildcat strikes in a Kentucky coal mine to ethnic wars in the Middle East, the Balkans, and the former Soviet Union. He will be giving a workshop for the Program on Negotiation at Harvard Law School on November 15th as part of their Executive Education Seminars. In our following conversation, he talks about his process for how to behave in negotiations, the common issues people have when negotiating, and more.

What is your four-step system for how to behave in negotiations?

What are the common issues people have when negotiating a business deal?

One of the biggest issues, interestingly, is not with the other side, but with your own side. When I ask businesspeople what they find most challenging in their negotiations, it is often the internal aspect of the deal, for  example, getting headquarters on board or dealing with other departments whose go-ahead you need. Successful negotiators spend as much strategic attention on the internal negotiation as on the external negotiation.

Should you always get more out of a negotiation than the other person? Why or why not?

It is a trap to focus too much on how well the other person does.  Focus rather on how well your own interests are met. That’s the point: to meet your own needs, not necessarily to do better than the other. Most negotiations take place in the context of long-term relationships, as in a marriage. If you are always asking: “Who’s winning this marriage?”, the marriage is in serious trouble. Focus on your interests — short-term and long-term. It may be instructive to remember the Chinese billionaire who made his fortune by always giving his business partners a little more than he took for himself; everyone wanted to be his partner and they made him rich! 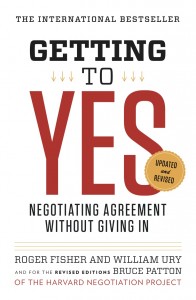 When have you been in a situation where you’ve negotiated in your favor?

I have been involved in many negotiations over the years, often as a third party in situations ranging from family feuds to labor strikes, to conflicts between business partners, to civil wars. Some have turned out successful, others not.  But let me tell you a secret.  In the cases of success, it is not me who resolved these conflicts; it was the parties themselves.  I simply provided them with a constructive environment, a few tips, and some encouragement.

If by your question, you mean when have I negotiated for myself, the answer is all the time at home and at work. Perhaps my most challenging negotiations, as for many, are with those who are closest and I am happy to notice some success here — in my favor and theirs. I have found that mutual gains is an approach that pays high dividends.

Dan Schawbel, recognized as a “personal branding guru” by The New York Times, is the Managing Partner of Millennial Branding, LLC, a full-service personal branding agency. Dan is the author of Me 2.0: 4 Steps to Building Your Future, the founder of the Personal Branding Blog, and publisher of Personal Branding Magazine. He has worked with companies such as Google, Time Warner, Symantec, IBM, EMC, and CitiGroup.

No Replies to "William Ury On Winning Business Negotiations"